Wednesday a bunch of us from Betty’s RV Park took a ride to Avery Island, outside of New Iberia, to visit the Tabasco manufacturing plant.  We’ve been here several times before, but it is always interesting to see what new things they have at their Country Store (gift shop).

You are charged $1 to enter Avery Island and I always thought it was cute how they retrieved your money.  Instead of handing them the money, the attendant sticks out a skinny stick with a clamp on the end that you put your money under. You can click on the photo to enlarge it. 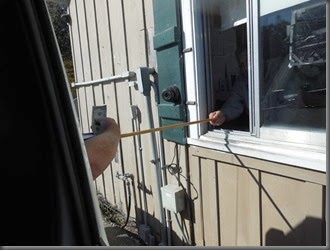 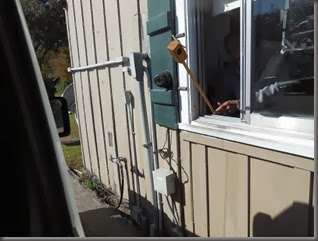 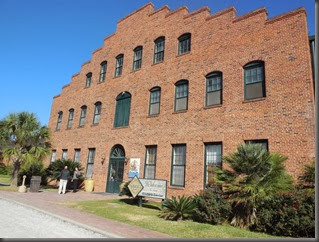 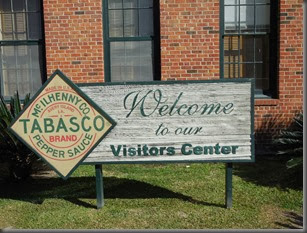 We signed up for the tour behind this large bottle. 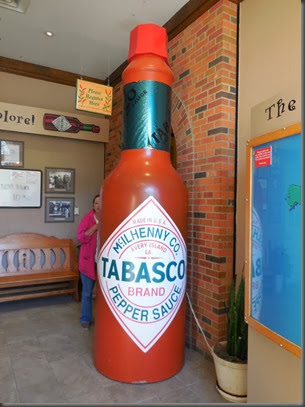 Our tour guide was very, very good this time….much more knowledgeable than others.  Although she gave the same memorized pitch she also gave interesting tidbit here and there.  Like we found out that the McIlhenny’s had three girls, so when they married the grooms had to agree to change their name to McIlhenny.  Also back in the day, pepper pickers were paid with “company coins”  that could only be redeemed at the “company store”.  This practice was stopped in the 1920s when it was outlawed by the government.

All the seeds to grow the Tabasco peppers come from peppers at Avery Island only.  They are shipped to many South American countries to be grown there and prevent disease or weather to destroy a whole crop. Once the peppers reach the exact shade of redness required they are always picked by hand and ground up and salted the same day. 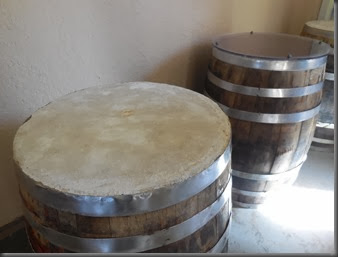 This mash is then stored in used wood barrels from Jack Daniels, after the char is shaved off, for three years.

Then the mash is put in a wooden vat along with high grade distilled vinegar and it is mixed for 28 days.  It is then strained and immediately bottled.  Here is an interesting fact:  all Tabasco Pepper Sauce is bottled right here in this one plant in Avery Island.  They send Tabasco to 130 countries with information written in each of those languages.  The day we were there they were running three lines all going to France. 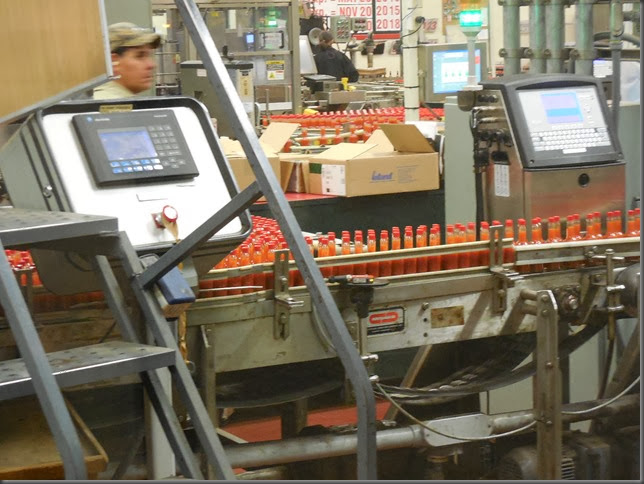 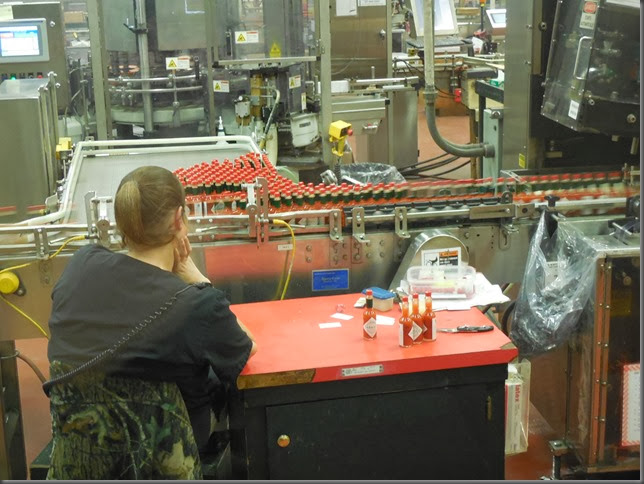 They run a counter so you can see how many bottles are being filled. 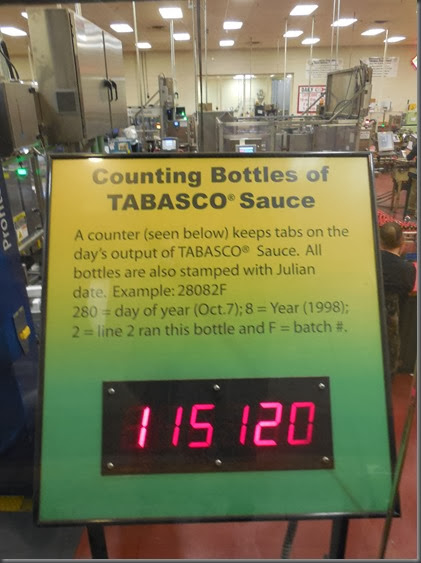 Next we went to the Country Store 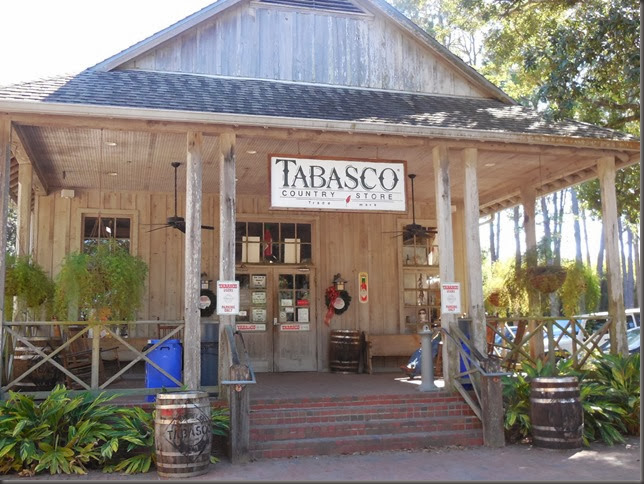 This place has everything Tabasco from neck ties, tee shirts to Tabasco asparagus.  Many things aren’t available anywhere else, like the Raspberry Chipotle Sauce, which I bought, or the Tabasco Pepper Jelly, which I also bought (going to pour it over a block of cream cheese for happy hour one night). 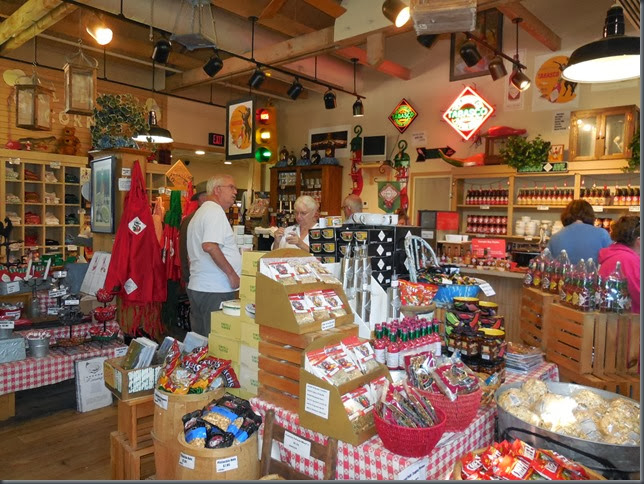 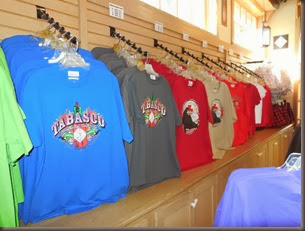 We finished off our outing by going back to Bon Creole for lunch and this time I got the seafood gumbo with shrimp and crab. 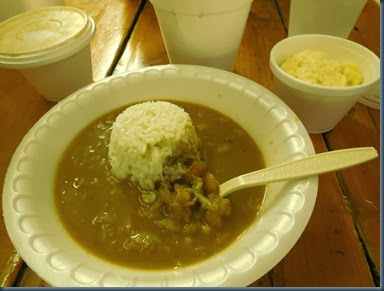 Did you know in Louisiana gumbo is always served with rice and potato salad.  I think the potato salad is to cool your pallet from the spices.

As if this wasn’t enough activity for one day we went back to Betty’s and had a fish fry AND then Judy Bailey came over and along with Dan Goan we had a concert!!!!! 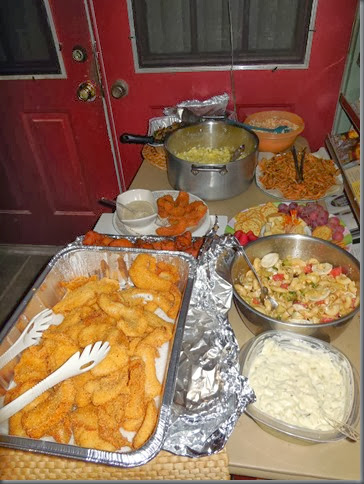 Bill and Maryann provided about 50 croppy fish filets that Bill had caught and they graciously fried them all for us.  Others brought hush puppies, potato salad, pasta salad, onion rings, fried potatoes and I made cole slaw.  A wonderful array of desserts finished off the meal. 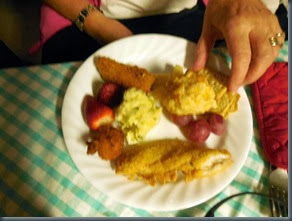 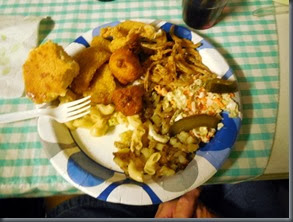 Judy Bailey and Dan Goan gave us a wonderful concert 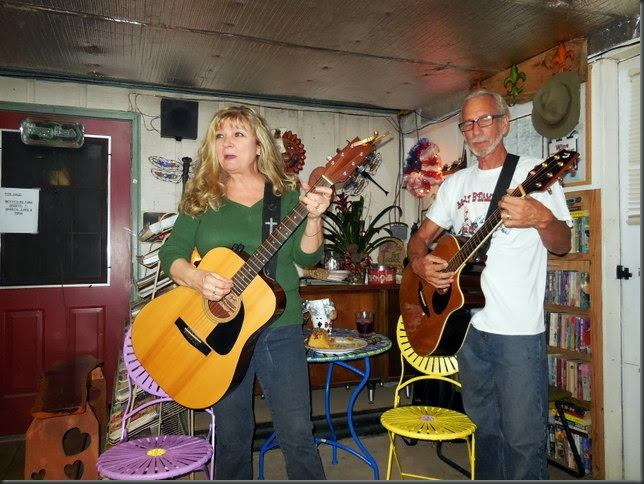 Dan has gotten very good on his guitar and is now singing solos. 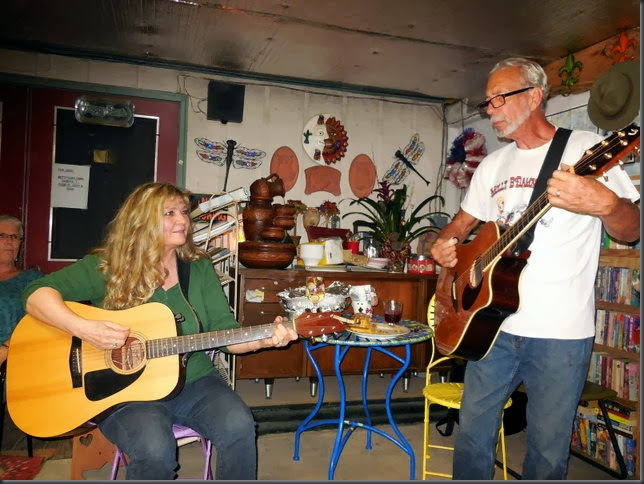 Everyone so enjoyed themselves