Yesterday was “run errands” day, so we and the Abeytas drove to Santa Fe which has more stores than Espanola.

First was driving up to Hyde Memorial State Park on the north end of Santa Fe to see if it’s a possible place for us to park when visiting our family.  Nope, won’t work.  First, you have to sharp turns on the edge of Old Town that is hard to navigate on such narrow roads.  Next, it is nine miles up a very steep and windy road at 35 mph.  Although the area is very pretty and there are seven electric sites, it would take just as long to get to our daughters than if we parked at Cochiti Lake COE.  Plus being a state park there isn’t any Senior Pass discount so we’d be paying more than at a COE.

Next was Home Depot and had lunch at Jim’s fav, Horseman’s Haven. Jim often tells folks about the #2 Chili they serve here.  If you stick a toothpick in the sauce and then slide it through your lips, it takes 15 minutes to stop feeling the heat. 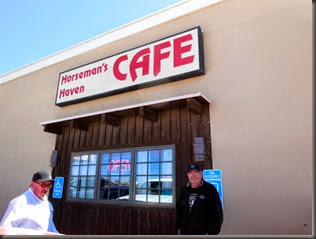 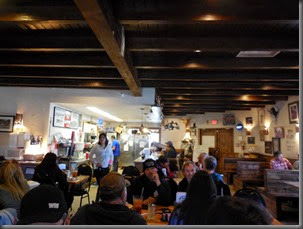 We all had burgers (mine without the bun or chili, Bernie)…their’s smothered in Chili #1.  Jim also ordered a small side cup of #2 Chili. 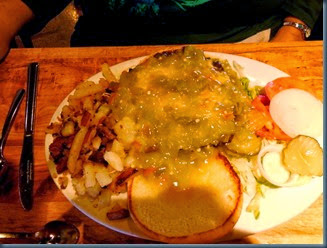 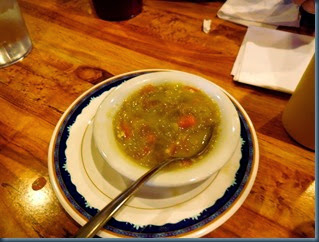 Teddy and Roberta both thought the #1 chili was hot enough, but Jim spooned a couple teaspoons of of #2 on top of his burger.  I was happy with my burger patty and home fries.  We did buy a pint of #2 Chili to keep in the freezer so Jim can “share” this hot concoction with other brave folk during our travels.

With our bellies full, we carried on with our errands going to Sam’s where I found two hotel quality king-sized pillows for $20.  I have always had problems deciding on which pillow to buy and am seldom happy with my choice.  Hopefully these will work.  After that we drove to the local Harbor Freight, but there wasn’t much there for me, but Teddy picked up a couple of things.

We got home by 4 p.m. in time to see the pre-game of baseball’s opening day and our beloved Colorado Rockies.  Well, after five innings they are still our beloved Rockies, but they weren’t playing very well.  Ending score was 1-10 in favor of the Florida Marlins.  They have a wicked pitcher in Jose Fernandez.

We stopped watching after the fifth inning and joined The Abeytas and watched the series finale of “How I Met Your Mother”.  We are not constant watchers of this comedy, but are aware of the premise and have seen parts of programs.  But I must say I was very impressed with their finale.  I thought it was very well done and enjoyed it a lot.

After we watched the late news we called it a day and went to bed.  Hope your weekend was as enjoyable as ours.