Thursday we drove over to South Fork to see what had changed along the way since September.  The road construction through Monte Vista is finished and it is a nice road, but we understand the businesses suffered a lot because of all the mess in front of their locations.

We stopped at Ken’s Tire Center in Del Norte and visited with Jim’s cousin, Alice Kay, and her husband, Ken.  We learned that Del Norte has had a infusion of a few new businesses.  Gateway Motors moved to Monte Vista and their station was purchased by Three Barrel Brewery which will relocate from Columbia street.  Calvillo from Alamosa opened a location in Del Norte recently.  Also there is a new flower and gift shop that has a coffee bar in the back that also serve cinnamon rolls and donuts.  It also seems the Windsor Hotel is active with new folks running the restaurant that we heard was very, very good.  That sure is a lot of activity since September for one little town.

We found the opposite in South Fork with several businesses closing down.  There are only three places to eat now a days with the Malt Shoppe, Good News Coffee Shop and Ramon’s.  Gone is Silver Fork, Hungry Logger and even The Shaft.

We drove up towards Beaver Creek Reservoir checking out the two campgrounds on the way.  There’s no snow in Lower and Upper Beaver Creek and it looks pretty ready to open up even now.  The large cement block, composting restroom in Upper Beaver is gone leaving just the log cabin restroom. But it looks like they prepared the land to add a fiberglass CXT restroom in the future.

The reservoir is still frozen over even as the water is slowing being drained out in order to repair the dam that has had a hole in it for the last two years.  The reservoir will be completely drained, dam repaired and then use the spring snow melt in 2015 to start refilling it.  It will probably take several years to get the water back up to normal levels.  You can see on the edges where the water was, where it drained to and refroze a couple of times.  The middle is just beginning to melt and we saw geese getting a drink.

But the thing that really caught our attention was how low the water level is up by the parking lot and the restroom up there.  In this photo you can see the restroom up in the top left corner with the boat ramp in the lower left corner.  Look how far the water is located. 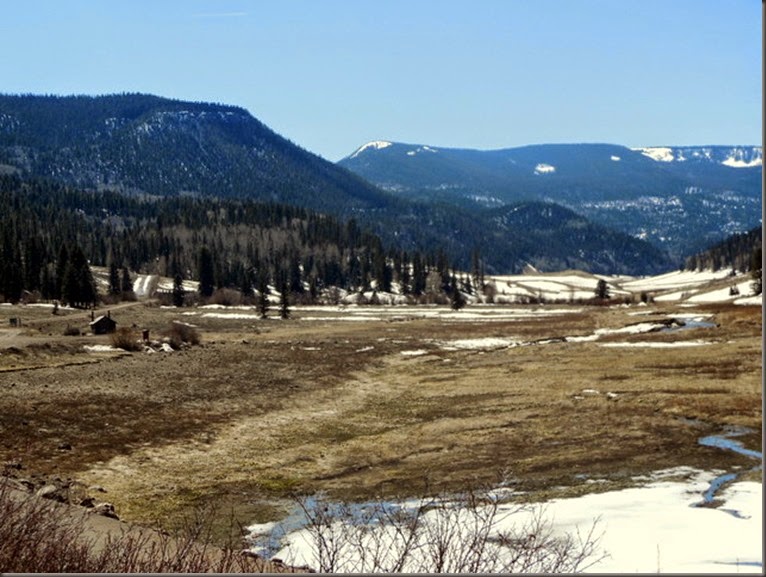 The Parks and Wildlife Department said in the newspaper that there is no limit to the number of fish you can get out of Beaver Creek Reservoir but OMG, look at the muck you have to walk through to get to the water!

We then drove up towards Big Meadows passing the composing toilet at Columbine rest stop and it too is gone. 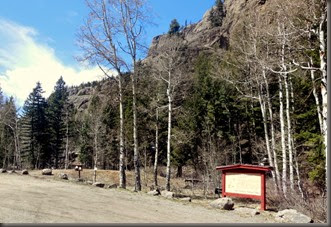 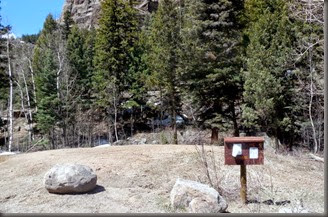 We drove up to the gate at Big Meadows to see how much snow blocked the entrance….not much.  Previous years you couldn’t see the gate for all the snow built up high. 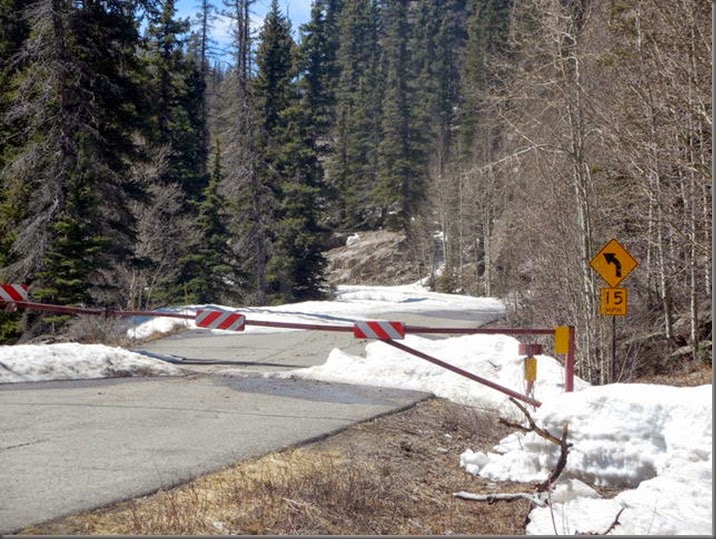 Driving home I took a photo of Fun Valley.  Sure looks different being empty of the 800+ rigs usually found here during the summer. 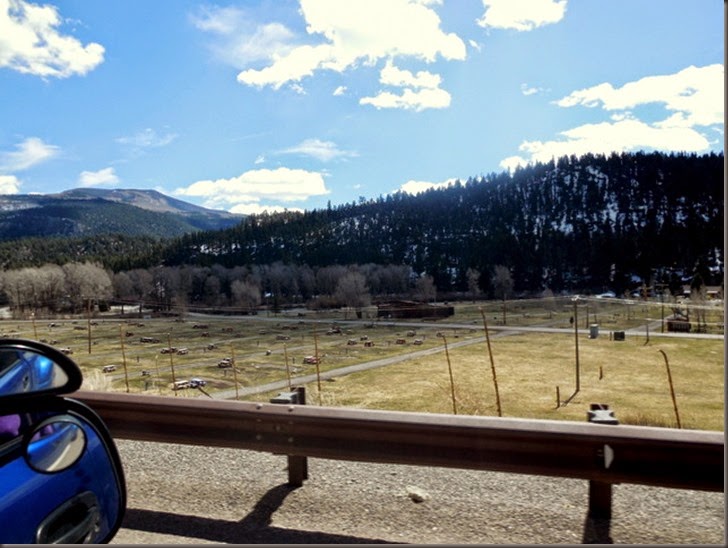 It was a nice day in the mountains; not too cool at all; shirt-sleeve weather during the day at least.  We’re hoping to be able to move up there in a month to spend some time there before the campgrounds open up.  And, no, we are not camphosting this summer. I have tired and don’t plan on working much anymore.  Besides the campgrounds in this area are run by a different concessionaire than the company we worked for.