Holiday activities here at Betty’s RV Park began with a Dirty Santa exchange on Sunday.  Most of the gifts were of the alcoholic type. 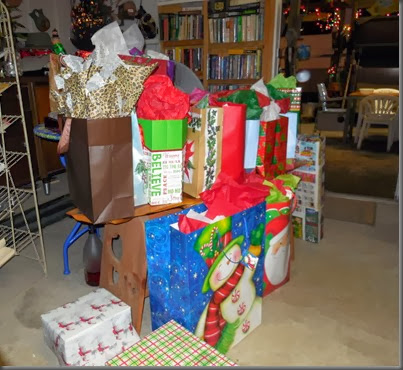 There was a lot of packages going back and forth depending on the type of booze or wine being opened.  Lots of laughter and good natured ribbing circulated. 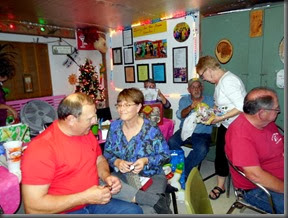 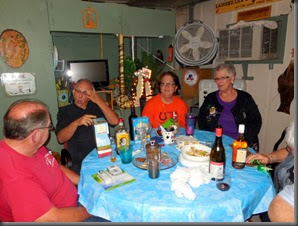 We were happy to receive an electric grill and a weather station, which we really needed since ours just died.

In Colorado it is a tradition to have tamales for Christmas.  In our previous life Jim and I went to Jim’s brother, Ron’s house Christmas Eve for a huge Mexican Fiesta meal that he and brother, Don, prepared.  Tamales feature prominently in the meal which they bought locally.

There are two other couples from Colorado staying here at Betty’s and we were talking with Tom Troy about this tradition.  Finding tamales in the middle of Cajun country is a challenge…there aren’t even a lot of Mexican restaurants around here.

Tom got a lead for a place in Lafayette that sold tamales so Tom and Jim went on a venture Tuesday, Christmas Eve, to find some.  The restaurant did indeed have tamales, but they wanted $40 a dozen…that’s not a typo.  Their reasoning was that they were really big tamales.  Thanks, but we’ll pass. 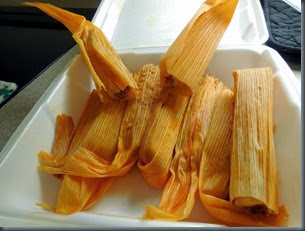 The guys drove to another Mexican restaurant and found some for $17 a dozen…now that’s better.  So we had tamales for Christmas after all.

On Christmas we gathered at 2 p.m. in Betty’s inside patio room for turkey, veggies and tons of desserts.  I made two Apple Crumb Pies that were well received. 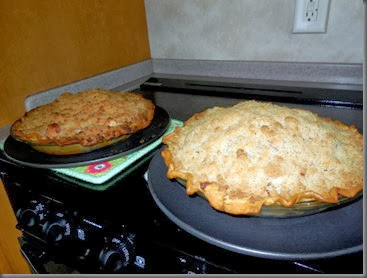 This is a little blurry, but took it with one hand.  Think we had enough food.  Jay’s Crawfish Pie there in the front with the large spoon, was a big, big hit.  Had three pounds of crawfish meat in it with copious amounts of butter…best I ever had. 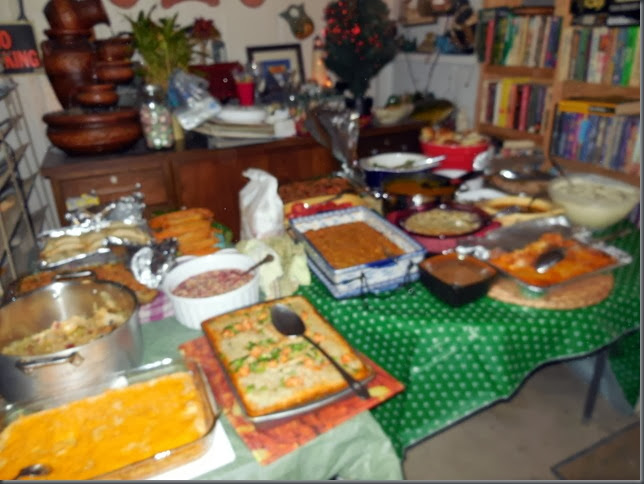 Of course, we all ate too much and practically rolled back into the same room at 4:30 for happy hour.  Bernie and Dodo provided Reindeer Farts (pardon me) which consisted of layering Kahlua, whiskey and Bailey’s in a glass.  Oh my, oh my….delicious.  We toasted the day. 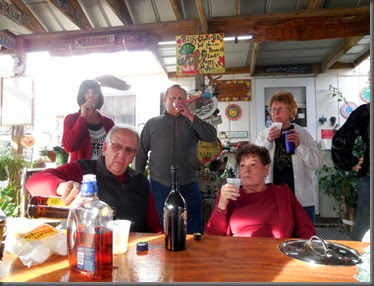 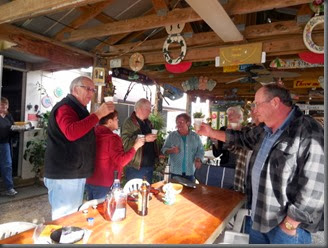 What a wonderful time we had sharing this precious holiday with all these wonderful people who come together in community as part of Betty’s family.