Wednesday I was surfing around facebook and a friend commented that Hank was at the same RV Park we were in.  I called the office and sure enough, Hank was here so I called him and he came over.  Conversation brought forth information on several other friends also in the area.  “Well, let’s have a get together for happy hour.”

That was at noon and by 4 p.m. we had ten people in our rig for happy hour.  Mercedes was in the middle of a high wind condition so being outside was out of the question.  Here’s the Newby’s, the Coleman’s, the Nankivell, Hank and us.  During the conversation we were talking about Bob and Molly Pinner and no one knew where they were located, so we called Molly and chatted….made here part of the party as well.

Then our dear friend Fay stopped by; we were so glad to see her. 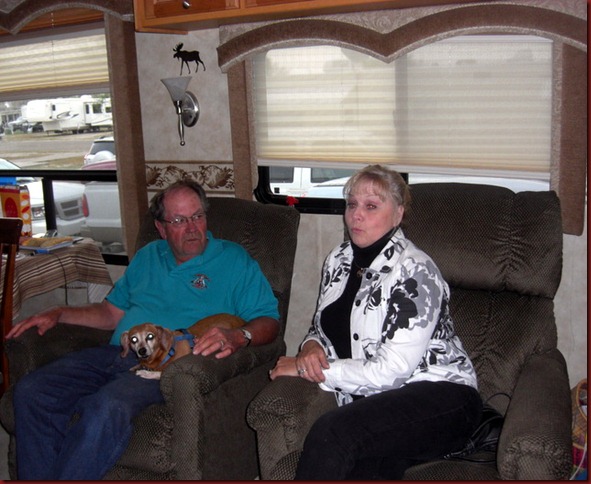 We all had a great “what have you been doing” talk and the wine and snacks were scrumptious.

Later Jim and I went out with Fay to Sunrise Mexican Restaurant for a really nice dinner.

Thursday we had errands to run (Poncho got a new dog harness) as our truck docking station for our XM radio went on the fritz and we went to Best Buy in Mcallen for a new one.

We moved to Harlingen Friday….more about that tomorrow.